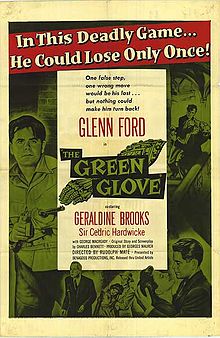 Glen Ford plays Michael Blake a WWII veteran who retuns to France to find a mysterious Green Glove he had discoverd during the early days of Normandy invasion.

The Green Glove (1952) is an action adventure film starring Glenn Ford, directed by Rudolph Maté and released by United Artists.

Glenn Ford stars as an American paratrooper who travels to France after the end of World War II to try to recover a jewel-encrusted glove that had been stolen from a country church during the war. His quest leads him to a beautiful young tour guide (Geraldine Brooks), and a Nazi collaborator (George Macready) whom he had fought during the war. The movie was shot mostly on location in France and Monaco. It was based on actions that took place during Operation Dragoon.